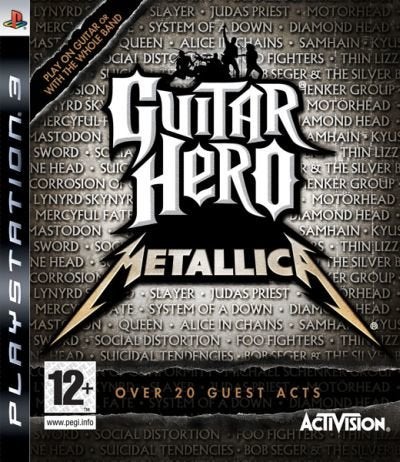 "Ride the Lightning" with musical icons Metallica and over 20 other rocking acts in an all new Guitar Hero experience -- Guitar Hero: Metallica. Enter the world of Lars Ulrich, James Hetfield, Kirk Hammett and Robert Trujillo and experience the intensity and skill of one of the greatest bands of all time. Shred on guitar, rip on drums and wail on the mic to a set list featuring over 45 explosive hits from Metallica's illustrious career and a wide variety of other legendary artists personally selected by the band, such as Alice In Chains, Foo Fighters and Queen. Fans will be able to rock as Metallica while performing in venues reminiscent of the band's epic album covers, themes from their music and real world locales. Becoming the Band -- For the first time ever, Guitar Hero Metallica will allow fans to come together and thrash as the explosive, world-renown metal and rock band, Metallica, whose album sales have exceeded 100 million worldwide. Transform into metal legends Lars Ulrich, James Hetfield, Kirk Hammett and Robert Trujillo as full body scans and signature moves motion capture allow players to virtually experience the high intensity of a Metallica performance. Live Like Metal Legends -- Follow the path of the metal legends in either single instrument or band career game modes playing as the band to a soundtrack of their greatest hits while also rocking with over 20 additional artists selected by the band. Seek and Destroy -- Immerse yourself in themed Battle Mode attacks, such as briefly blacking out your fellow rocker's note track or modifying the amp overload to include the signature Metallica lightening. Test Your Metal -- After nailing a song, test your Metallica know-how by replaying the song with trivia pop-ups. The on-screen displays give information about the song being played, and with guest artist songs, information about how the band is tied to Metallica will be displayed along with details such as band history and lyrics.