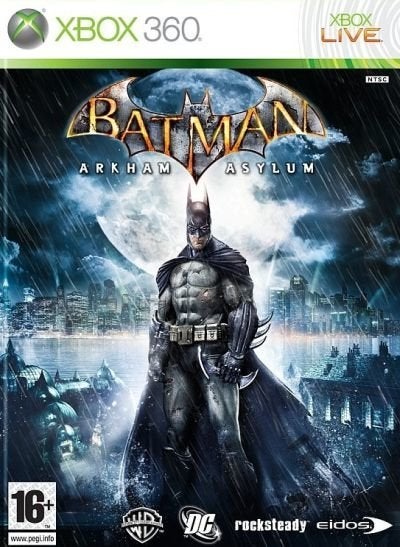 In Batman: Arkham Asylum the player assumes the role of Batman as he delivers The Joker to Arkham Asylum. There, the imprisoned super-villains have set a trap and an immersive combat gaming experience...
Read more

In Batman: Arkham Asylum the player assumes the role of Batman as he delivers The Joker to Arkham Asylum. There, the imprisoned super-villains have set a trap and an immersive combat gaming experience unfolds. With an original script penned by Emmy Award-winning Batman writer Paul Dini, the game brings the universe of DC Comics' detective to life! Batman: Arkham Asylum exposes players to a unique, dark and atmospheric adventure that takes them to the depths of Arkham Asylum -- Gotham's psychiatric hospital for the criminally insane. Gamers will move in the shadows, instigate fear amongst their enemies and confront The Joker and Gotham City's most notorious villains who have taken over the asylum. Using a wide range of Batman's gadgets and abilities, players will become the invisible predator and attempt to foil The Joker's demented scheme. Utilize the unique FreeFlow combat system to chain together unlimited combos seamlessly and battle with huge groups of The Joker's henchmen in brutal melee brawls. Investigate as Batman, the World's Greatest Detective, by solving intricate puzzles with the help of cutting edge forensic tools including x-ray scanning, fingerprint scans, 'Amido Black' spray and a pheromone tracker. Face off against Gotham’s greatest villains including The Joker, Harley Quinn, Victor Zsasz and Killer Crod. Become the Invisible Predator with Batman's fear takedowns and unique vantage point system to move without being seen and hunt enemies. Choose multiple takedown methods, including swooping from the sky and smashing through walls, and use the predator camera get a closer look at the action. Explore every inch of Arkham Asylum and roam freely on the infamous island, presented for the first time ever in its gritty and realistic entirety.