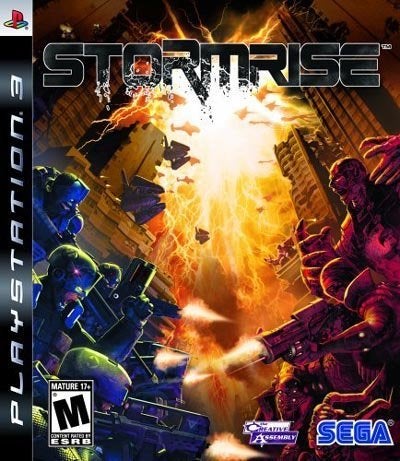 Experience the heat of the battlefield by leading your troops from the front line, instead of the traditional way of controlling the units from a detached view point. Stormrise also allows units to be...
Read more

Experience the heat of the battlefield by leading your troops from the front line, instead of the traditional way of controlling the units from a detached view point. Stormrise also allows units to be commanded in the air, across rooftops, on the earth’s surface and even underground, this unique idea of "verticality" introduces multiple layers of gameplay that must be mastered for strategic advantage. The experience is heightened by a simple yet effective control system tailored specifically for consoles, which allows easy unit selection, rapid navigation and precise deployment. The first truly 3-D real-time strategy (RTS) game, Stormrise puts players in the heart of the action with an all-new third-person camera perspective. No other RTS game combines the unprecedented level of immersion and emotional intensity with the scale and depth that The Creative Assembly has become famous for. Stormrise breaks tradition with the genre’s typical top-down viewpoint, allowing players to explore and track enemies in multi-dimensional areas, including everything from high-rise rooftops to underground caverns. With revolutionary controls designed specifically for consoles, players will lead their troops from the front in the midst of explosive battles to put an end to years of bloody conflict between the Sai and the Echelon races. Verticality: Players can use vast underground areas, rooftops and multi-layered vertical locations to gain the strategic advantage. Verticality combined with the third-person point-of-view marks a whole new way to play a real-time strategy game. Revolutionary Console RTS Features: Groundbreaking "Whip Select" feature brings quick, intuitive, next-gen controls. Additionally, a Tactical Playbook gives players all the strategic choice of a traditional RTS, but with the simplicity and accessibility of a playbook.