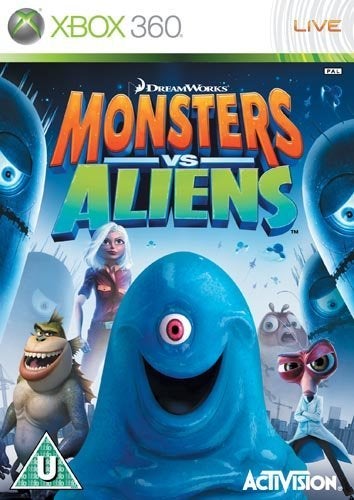 Based on the 3D animated picture by DreamWorks Studios, the Monsters vs. Aliens videogame puts the fate of the planet in players' hands as they lead a dynamic team of five misfit monsters on a mission...
Read more

Based on the 3D animated picture by DreamWorks Studios, the Monsters vs. Aliens videogame puts the fate of the planet in players' hands as they lead a dynamic team of five misfit monsters on a mission to save the world ... as only they can. The game allows fans to experience the movie's action and humor while playing as The Missing Link, the macho half-ape, half-fish; the gelatinous, indestructible and always hungry B.O.B.; and Ginormica, the 49-foot-11-inch tall woman and Insectosaurus, the 350-foot tall grub. Players utilize each character's distinct strengths, sizes and abilities to battle giant alien robots that are wreaking havoc on earth. Friends or family members can join in the excitement at anytime as the world's most brilliant scientist, Dr. Cockroach, Ph.D., in the unique co-op multiplayer mode. Multiple Characters -- Utilize The Missing Link's skillful acrobatics to cling to and scale various surfaces. His agility and brute strength lets him take down enemies of all sizes. The gelatinous B.O.B. can swallow and spit out enemies and objects, stretch, bounce, stick to walls and ceilings and seep through grates and cracks. Ginormica's enormous size allows players to race through the city using cars as rollerskates and her sheer strength comes in handy to lift heavy objects and brawl with the robot army. And, as the brainiest of the group and the mission giver, Dr. Cockroach, Ph.D. is playable at any time in co-op mode to assist with slowing down enemies, overcoming obstacles and grabbing collectibles. Explore cool locations from the movie and more -- Visit cool locations from the film and beyond including the streets of San Francisco, Gallaxhar's huge overcompensating mothership and the super secret government containment area. Game exclusive levels, areas and locations include the inside of a 400-foot tall mining robot, a giant scorpion robot, a deeper look into the monster containment facility and Gallaxhar's mothership.