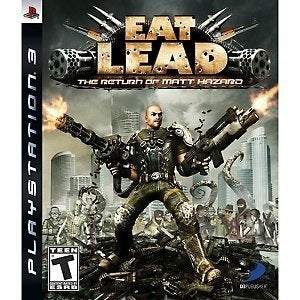 In Eat Lead: The Return of Matt Hazard, videogame action hero Matt Hazard gets his chance to prove once and for all that he is the king of shooters when the new owner of mega game publisher, Marathon ...
Read more

In Eat Lead: The Return of Matt Hazard, videogame action hero Matt Hazard gets his chance to prove once and for all that he is the king of shooters when the new owner of mega game publisher, Marathon Megasoft, gives Matt his comeback role starring in a new title for next-gen consoles that pits him against all of his memorable foes from videogames past. In the world of Eat Lead, however, everything stops being a game and becomes reality when it is clear that someone is using the new game to bring about Matt’s death once and for all. With only the mysterious QA to help him, Matt must fight against a legion of Marathon Megasoft catalogue of videogame characters to keep it from being Game Over forever. Eat Lead is a third-person shooter where the player takes the role of satirical video game character Matt Hazard, implementing an over the shoulder camera perspective with combat emphasizing a duck and cover system using walls and other objects in the game’s environment. Matt can only carry two weapons at once from a continually changing selection due to the repeated manipulation of the game’s environment and level switching. As the game’s progresses, weapon upgrades are made available that can be applied for temporary effect such as bullets that can freeze enemies. These upgrades can be used again after a meter is filled through defeating more enemies. If close enough to an enemy, a string of close combat strikes can be performed. Some boss encounters will switch gameplay to an interactive cinematic where Matt must dodge and counter boss attacks through a quick time event system requiring certain buttons to be pressed or tapped when promoted on screen, with a health bar for both characters taking damage when successful/unsuccessful.