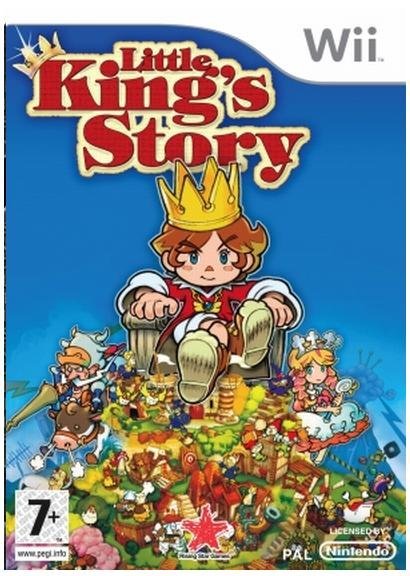 Little King’s Story is an original title designed and developed by some of the most respected names in the gaming industry. Featuring the efforst of Yasuhiro Wada (creator: Harvest Moon), Hideo Minaba...
Read more

Little King’s Story is an original title designed and developed by some of the most respected names in the gaming industry. Featuring the efforst of Yasuhiro Wada (creator: Harvest Moon), Hideo Minaba (Art Director: Final Fantasy XII), and Youichi Kawaguchi (Main Programmer: Dragon Quest VIII), Little King’s Story combines life-simulation, real-time strategy, and adventure elements along with an enchanting storyline to offer a new and unique gaming experience. Once upon a time there was a young boy named Corobo. He was a shy, withdrawn boy with few friends. One day while wandering the forest near his village he came across a crown infused with a mysterious power; the power to charm any person and make them follow any order. At this time an adventurer, the bull-knight Howzer, appears and informs Corobo that he is now the king of his village and that it is his responsibility to become the best king ever. Corobo then returns to his village to begin his efforts to turn his sleepy little hamlet into the best kingdom ever. As King, players will manage and involve their townspeople in the goals of creating this new territory; enlisting them to dig for treasure, build new buildings and otherwise better their community. Of course, leadership is a two-way street, so as King, players will try to conquer rival nations to create a single unified kingdom, while also granting the requests of townspeople at whim. The game transforms the Wii Remote to a royal scepter and offers players the chance to be the best king in the world! Little King's Story has an art style that is very 'story-book' in look and a magical fairy tale quality that will intrigue and delight gamers. The storyline, visual look, and lyrical music of Little King’s Story, work in concert to transport players to an interactive, enchanting, fairy tale world.

Other brands in Nintendo Wii Games