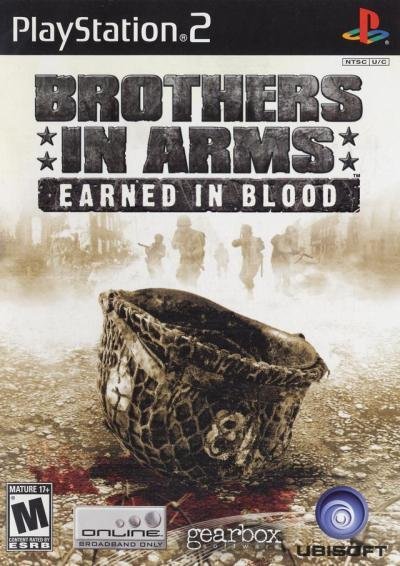 The second chapter of this WWII military shooter about the men in the field and the consequences of warfare, Earned In Blood features a new single-player story, new multiplayer missions, an all-new co...
Read more

The second chapter of this WWII military shooter about the men in the field and the consequences of warfare, Earned In Blood features a new single-player story, new multiplayer missions, an all-new cooperative-style game mode, and new weapons and vehicles. Delve deeper into the most authentic WWII experience as you take the role of Sgt. Joe "Red" Hartsock, the new squad leader of 2nd Squad. You represent the best of the 101st Airborne, the Screaming Eagles. Command two new squads of American paratroopers, your fire team and assault team, through war-torn France's urban streets and villages. On the verge of liberating the last regions of France, your missions will be take you deep behind enemy lines, further and more dangerous than ever before. Next chapter of Brothers In Arms - The award-winning WWII shooter returns with more of the action, story, and authenticity that has critics and fans raving. New single-player narrative takes you beyond Hill 30 - Play as Sergeant Joe Hartsock and lead your squad beyond Carentan. It will be up to you and your squad to defeat the last enemy bastions and bring freedom to Normandy. New cooperative Multiplayer mode - Take on the enemy with a friend by your side. Work together and utilize each other's squads or face certain death. Unrivaled authenticity – Fight actual Airborne Infantry battles of D-Day accurately recreated under the direction of author, historian and Airborne Ranger Col. John Antal, using thousands of official photos, maps, After-Action Reports and eyewitness accounts. New multiplayer missions - Taking online tactics to new heights, Brothers In Arms Earned In Blood offers more unique multiplayer missions and improved online support on PC and consoles. Skirmish mode - Brothers In Arms Earned In Blood features an all-new Skirmish mode that allows players to take a tour of duty through a series of authentic and increasingly difficult custom combat missions.

Other brands in PS2 Playstation 2 Games